P-pop Kings SB19 announces their return to the music scene with WYAT [Where You At], a disco-pop track that highlights the urgency of disconnection to reconnection of the times. The upcoming release marks SB19’s first new material as a group in a year after launching their 2021 EP, Pagsibol. 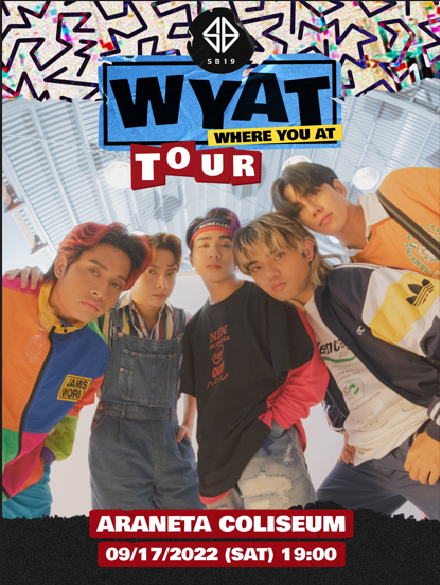 “It’s been a year, the word ‘hiatus’ may sound negative but we took it from a different perspective. We maximized the opportunity to think more as to what we can improve on, how we can prepare for our comeback,” says SB19 Stell.

SB19 Ken mentions “We are thrilled to be releasing a new song for our fans. Bigger, better. I hope that A’TIN will appreciate at best the work we’ve done for our upcoming tour.” WYAT drops on all streaming platforms on September 2, 2022, with the official music video to be released on the same day.

The award-winning and Billboard nominee Philippine Pop phenom is also set to stage their biggest local and international tour to date. WYAT [Where You At] Tour kicks off on September 17, 2022 at Araneta Coliseum, to be followed by a series of shows in Clark, Cebu, Davao and more.

In the following months, the tour extends globally as SB19 heads to multiple countries – US, UAE, and Singapore to name a few. International A’TIN can expect SB19 to drop by their city starting October 2022.

“This will be the first time for us to be going out of the country for our own concert,” reveals SB19 Josh. “We’re excited to meet our international fans. If I may put it: we were caterpillars inside cocoons when we were just starting and now, we’ve turned into butterflies ready to spread our wings!”

According to SB19 Justin, the five-piece group is very much involved in the creative process behind the upcoming tour, from conceptualization to choreography, from promotion strategy to visual ideation.

He explains, “When SB19 Pablo told us the meaning of WYAT, the song that he and his brother Josue created, I was able to conceptualize WYAT. From there, our team was able to brainstorm on how to improve my initial concept. We made options and showed the other members of SB19, so they could also give their insights. One idea led to another. We started plotting everything: from teasers to the actual music video, every post, down to the last detail.”

SB19 Justin adds, “Josh tweaks a bit of everything, from choreography to the direction of our shoots. He and Pablo has a big role in decision-making. Ken helps with the creative process, from how the dances should look to the set design. Aside from being the main choreographer, Stell also shares ideas on how to promote our comeback. He’s been mentioning if we could play the videos after our recent performances before the tour starts, So we did. Last August 7, 2022 at Mall of Asia Arena was when we first dropped our video teaser in front of thousands of live audience. I highly consider what the other members, management, staff and other people around me think. It really takes a village and is a healthy collaboration.”

More details about the local and international tour will be announced soon.

For more information about SB19’s series of shows, check out the updates on their social media accounts.