To kickstart the Christmas countdown, SM Supermalls began its 100 Days of Happiness last September 16, where they aim to create a circle of happiness with 76 participating malls, shoppers, the marginalized communities of women, persons deprived of liberty, artisans, cause-oriented organizations, and select local government units. 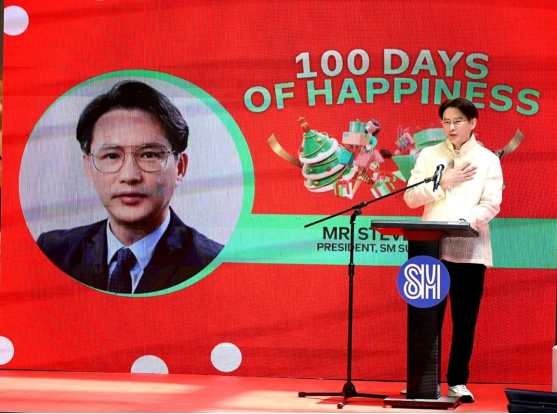 “We want to create a circle of happiness in all our SM malls by featuring products of cause-oriented programs which we will offer to our shoppers who, in turn, give them to friends and family, and ultimately, benefit the communities that created these products,” said SM Supermalls President Steven T. Tan.

Through the campaign, SM Supermalls encourages Filipinos to support the advocacies of individuals and organizations that provide opportunities and create livelihood for their communities. For this year, SM partnered with bag designer Zarah Juan, Spark PH, the Girl Scouts of the Philippines (GSP), the Association of Foot and Mouth Artists of the Philippines, UNICEF, and the Quezon City LGU for its Vote to Tote initiative, among others. 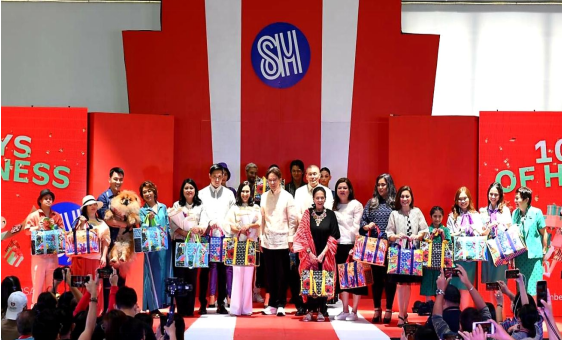 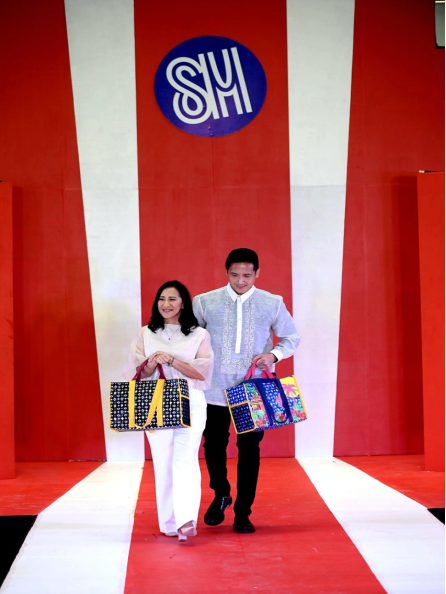 Equipping young girls to lead and build the future, one box of brownies at a time

For this year’s 100 Days campaign, SM Megamall, along with 9 other SM malls, is collaborating with Brownies Unlimited and the Girl Scouts of the Philippines. For every purchase of a special GSP-themed box of brownies in-mall and via the SM Malls Online App, one girl will be sponsored with a GSP membership for a year. 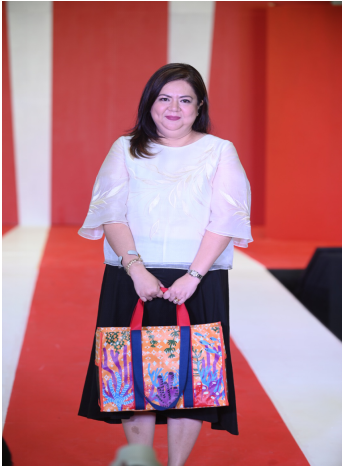 Designer Zarah Juan, along with the local government of QC, Spark PH, and SM Supermalls partner on the Vote to Tote program – an initiative fueled for, and by, marginalized women and female persons deprived of liberty. 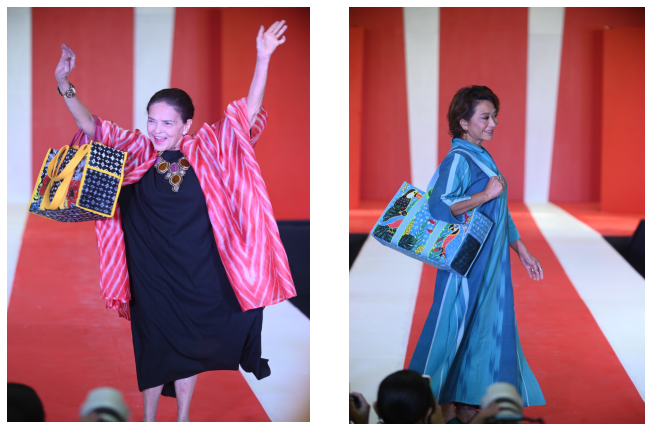 Women of Subtance Gina Pareño and Ces Drilon walk the runway to show support for the 100 Days of Happiness’ causes and initiatives.

“We have a lot of young girls across the country and they’ve had such difficult times during the pandemic. Our membership dropped significantly. By buying a box, you can sponsor a girl for one year and she can learn so many things like being independent, loving her country more, and helping her community,” said GSP President Nina Lim-Yuson.

Recently, SM Supermalls helped the GSP vaccinate all its 70,000 members nationwide. By providing them with convenient and safe COVID-19 vaccines, SM Supermalls was able to ensure that the GSP members have access to quality healthcare services.

SM shoppers can purchase a box of brownies from 46 Brownies Unlimited branches nationwide and the SM Malls Online App. 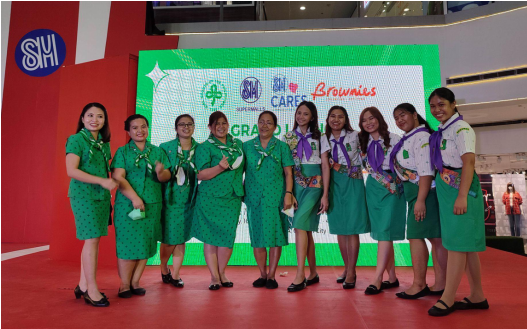 Ladies in Green: The Girl Scouts of the Philippines come together to celebrate Girl Scouts Week 2022 at SM City North EDSA

“Christmas is all about giving. We are very happy that this year, the communities of Quezon City are included as beneficiaries in this program. And apart from helping the women in our communities, we are also able to help the environment by upcycling 70 tons of election tarpaulins that we’ve collected.” said Mayor Belmonte.

Juan, the designer, was the brainchild of the upcycling initiative. “During the elections, there were tons of election campaign wastes. I wanted to do something and I thought I have my platform– my designs. If my designs can actually solve this problem, then it’s worthwhile. Then I pitched the idea to Maica Teves, the founder of Spark PH. From there, we gathered all the help we can– from the Quezon City LGU who will help us collect tarpaulins, the women communities that can help us create, and SM Supermalls who can provide us the platform to distribute.” 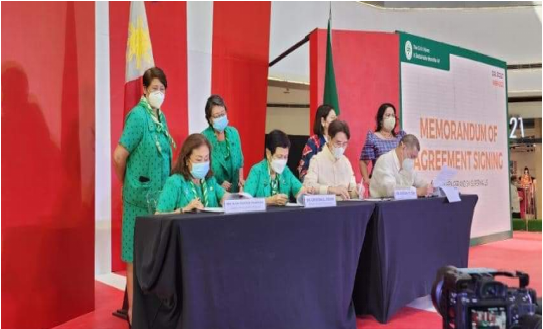 In its commitment to building communities, especially for women and the youth, SM Supermalls and the Girl Scouts of the Philippines sign a memorandum of agreement to formalize a meaningful partnership beyond the year 2022.

A Happiness Walk was done to showcase the upcycled tote bags that shoppers can buy in SM malls. Joining the Happiness Walk were men and women of substance including select Girl Scouts members, Jeremy Lapena and Bernce Sevilla of the Downs Syndrome Association of the Phils, Mylene Abiva of WomenBiz, media celebrities Ces Oreña Drilon, and Gina Pareño among others.

The proceeds of the upcycled tote bags will be given to the women PDLs in Camp Karingal, and the marginalized women of Barangays Sto. Cristo, Greater Lagro, and Pinyahan in Quezon City. The tote bags will be sold in the following SM malls:

Helping a community of artists

And in the south of Metro Manila, the SM Mall of Asia family will be partnering with the Association of Foot and Mouth Artists in selling painted Christmas cards to the shoppers. 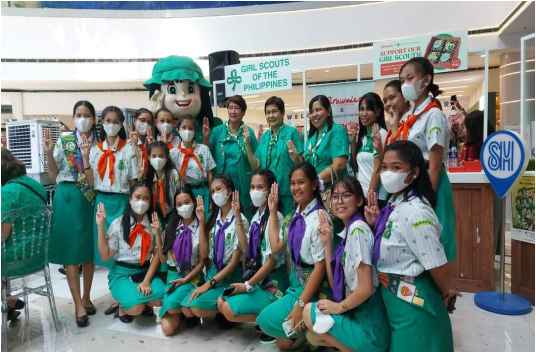 In partnership with SM Supermalls and Brownies Unlimited, the Girl Scouts of the Philippines launch GSP-themed brownies from September 16 to December 15, 2022. For every purchase of a box of brownies, in-mall and via the SM Malls Online app, one scout will be sponsored with a year’s free membership.

“All these and more will start to unfold in the coming days as we continue spreading happiness across all SM malls around the country. Let us not waste our next 100 days and use it to make one another happy by giving. Today, let the countdown begin to a hundred days of happiness!” Tan closed.

This is the second time SM Supermalls has started a holiday countdown campaign. In 2021, the biggest mall network in the Philippines showed the world more than a hundred ways of giving through 100 Days of Caring. Underserved communities surrounding the 76 SM malls were provided with their urgent needs through in-kind and monetary donations by the malls, its various business units, and the employees.

For the list of all partner institutions and their beneficiaries visit www.smsupermalls.com and follow @smsupermalls on all social media accounts.